By Drew Dorian and Scott Oldham

Confident handling and a powerful turbocharged engine are expected from a BMW sports car, and the 2022 Z4 convertible delivers just that. But part of its appeal also lies in its upscale cabin, which is comfortable enough to serve as a daily driver. The base engine offered is a peppy turbocharged four-cylinder while a twin-turbo inline-six can be found in the racier M40i model. All Z4s are rear-wheel drive and use an eight-speed automatic transmission that is as well-tuned for sporty driving as it is for highway cruising. Handling isn't Porsche Boxster sharp, but it's close enough and still plenty fun on a twisty road. The Z4 is only offered as a softtop convertible, but if you'd prefer a hardtop coupe, take a look at the mechanically similar Toyota Supra, which was developed alongside the BMW.

Where This Vehicle Ranks

The Z4 is much the same as it was last year, but ambient lighting is no longer standard and wireless smartphone charging is no longer an option. The Driving Assistance package has been removed from the Convenience and Premium packages and is now a standalone option package.

At its base price, the 2022 Z4 Drive30i is an undeniable value. It costs considerably less than its main rival, the Porsche Boxster, and it offers more than enough performance for most buyers. You can also dress it up with the M Sport Kit, which adds an M Sport suspension for better handling and dials up its appearance inside and out with an aerodynamic body kit and M Sport steering wheel. Larger 19-inch wheels and tires are also available, and BMW offers the Dynamic Handling package, which adds larger M Sport brakes and its M Sport differential for additional traction. Your new Z4 still won't accelerate like the much more powerful M40i, but it'll be more than quick enough to satisfy.

Every 2022 Z4 has an eight-speed automatic transmission with Sport mode as well as Manual mode. Paddle shifters mounted to the steering wheel are also standard. That's right: For the first time, the BMW Z4 is not available with a traditional manual transmission with a clutch pedal. You won't miss it. The eight-speed is one of the best automatics around with sharp responses, snappy shifts, and smooth operation. The sDrive30i is powered by the brand's excellent turbocharged 2.0-liter four-cylinder that makes plenty of torque and 255 horsepower. In our testing, this model accelerated to 60 mph in 5.1 seconds. That's quick, but it's a bit slower than a Porsche Boxster, which is still available with a manual gearbox. For more grunt, the M40i model gets a 382-hp twin-turbocharged inline-six. It's incredibly smooth and refined, and it turns the Z4 into a superfast sports car with a zero-to-60-mph time of just 3.8 seconds. That's quicker than the 350-hp Porsche Boxster S.

With its exceptional performance, it may surprise you that the Z4 is one of the most fuel-efficient sports cars in its class. The fuel economy of the Z4 sDrive30i is rated by the EPA to be 25 mpg city and 32 mpg on the highway. With its much higher level of horsepower, the fuel economy of the Z4 M40i is just a single mpg lower, getting 24 mpg city and 31 mpg highway. In our testing, both models recorded 20 mpg in mixed driving. Unfortunately, both engines require more expensive premium gasoline, and the Z4 has a small gas tank, so its fuel range isn't extensive. Expect about 300 miles of highway driving between each fill-up. For more information about the Z4's fuel economy, visit the EPA's website.

As is the case with all current BMWs, the Z4 has a very high-quality interior. In fact, it may have the best interior in this class. It features luxe materials, exceptional panel fitment, and excellent control placement. Its seats are comfortable with sizable bolsters to hold you in place when you're enjoying the Z4's dynamics. There is also more room inside than you might expect, even for those taller than six feet. Thick and insulated, its cloth roof seals tightly. When the top is up, the BMW's interior is impressively quiet, with so little wind or road noise it almost feels like a Grand Touring coupe. With the push of a button, it folds away in a few seconds. A wind blocker is standard to keep wind buffeting to a minimum with the top down, even at high speeds. Interior stowage is also quite generous. There are several storage bins around the Z4's cabin, including one in the center console and a felt-lined cubby to the left of the steering wheel. There's also a netted shelf behind the seats and two big cupholders up front. At 10 cubic feet, the trunk of the Z4 isn't huge, but it'll swallow luggage for two for a quick weekend road trip. 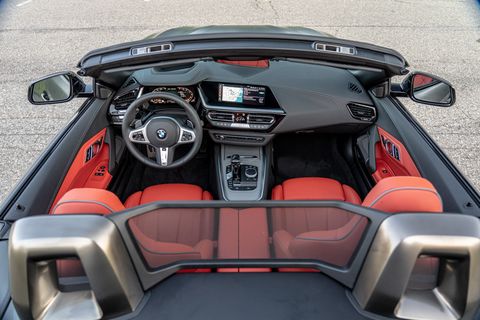 A massive 10.3-inch touchscreen is standard along with navigation and complimentary Apple CarPlay integration; Android Auto capability is not available. The latest iteration of BMW's iDrive system is easy to use, with sharp graphics. The system can also be controlled intuitively with a knob and buttons on the Z4's console or with voice commands. A USB port and Bluetooth streaming audio are also standard, although you have to pay extra for SiriusXM satellite radio.

BMW's warranty is average for the segment; however, its complimentary scheduled maintenance coverage is a standout. Such programs are not offered with its rivals, the Mercedes-Benz SLK-class and the Porsche 718 Boxster.